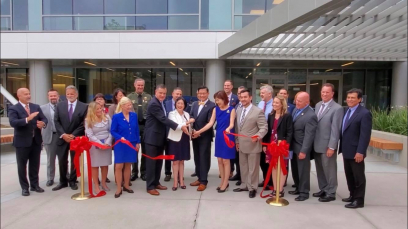 On August 28, I had the honor of being part of the ribbon cutting ceremony for the completion of the County Administration South building, formerly Building 16.

Soon after coming to this Board, former Supervisor Shawn Nelson, Roger Torriero (CEO of Griffin Holdings), county staff, and I started working together to create a modern, coherent, efficient, and welcoming plan for the Civic Center.

This new building has a County Service Center on the first floor. My vision for this one-stop-shop was to make it easier for people to access the County. By having 13 departments represented in one location, people will no longer have to walk from building to building across downtown to get to their desired destination for resources. The people of Orange County deserve better service from their government; this project is making that a reality.

The County Administration South building is a symbol of our larger aspirations for the relationship between Orange County’s government and its residents. We are turning the confusing, wasteful, and dark Civic Center of old into a welcoming, clean, and efficient Civic Center in which we can all take pride.

Starting September, the second out of four phases under the 2017 Civic Center Strategic Plan, begins with the construction of the County Administration North building.

Families Together of OC Opens Second Facility in Garden Grove
Last Thursday Families Together of Orange County opened their second location in Garden Grove. This federally qualified health clinic provides wraparound services to the community including…
OC Helps Small Business do Business with the County
For over a year, I have worked with Chairwoman Lisa Bartlett, Supervisor of the Fifth District, to deliver an innovative program that will boost our local economy and create jobs without raising the…
Santa Anita Camping Trip at the Miles Square Park
Last Saturday I had the honor of helping another group of kids make their first camping experience at Camp Sycamore at Mile Square Park a success. It was great seeing these kids from the Santa Anita…