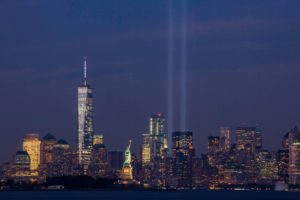 We remember the nearly 3,000 innocent men, women and children that were killed in the worst terrorist attack in American history. We also remember the brave men and women who scaled the towers and rushed the cockpit. And that America’s ideals prevailed.

“They sought to break our spirit and destroy the enduring values that unite us as Americans,” President Obama writes in this year’s Presidential Proclamation declaring today the National Day of Service and Remembrance. “United by a common creed, a commitment to lifting up our neighbors, and a belief that we are stronger when we stand by one another, we must find the courage to carry forward the legacy of those who stepped up in our time of need.”

We honor their legacy by taking action to serve our community. We pay tribute to their memory by setting aside the political divisiveness and uniting as one nation committed to fulfilling the great promise of America.

As we remember this day, we must also recognize that this fight is ongoing. Less than a year ago, our friends and neighbors in San Bernardino County were brutally assaulted in a heinous attack on county workers celebrating at an office Christmas party.

“The threat we face today,” the former chairman and vice chairman of the 9/11 Commission say, “is arguably worse than the one we confronted in 2001.”

We must face this challenge united and ever-vigilant.

“Ours is the cause of human dignity; freedom guided by conscience and guarded by peace,” President Bush said on the first Patriot Day. “This ideal of America is the hope of all mankind. That hope drew millions to this harbor. That hope still lights our way. And the light shines in the darkness. And the darkness will not overcome it.”