Veterans Day: Orange County Steps Up and Delivers for Veterans 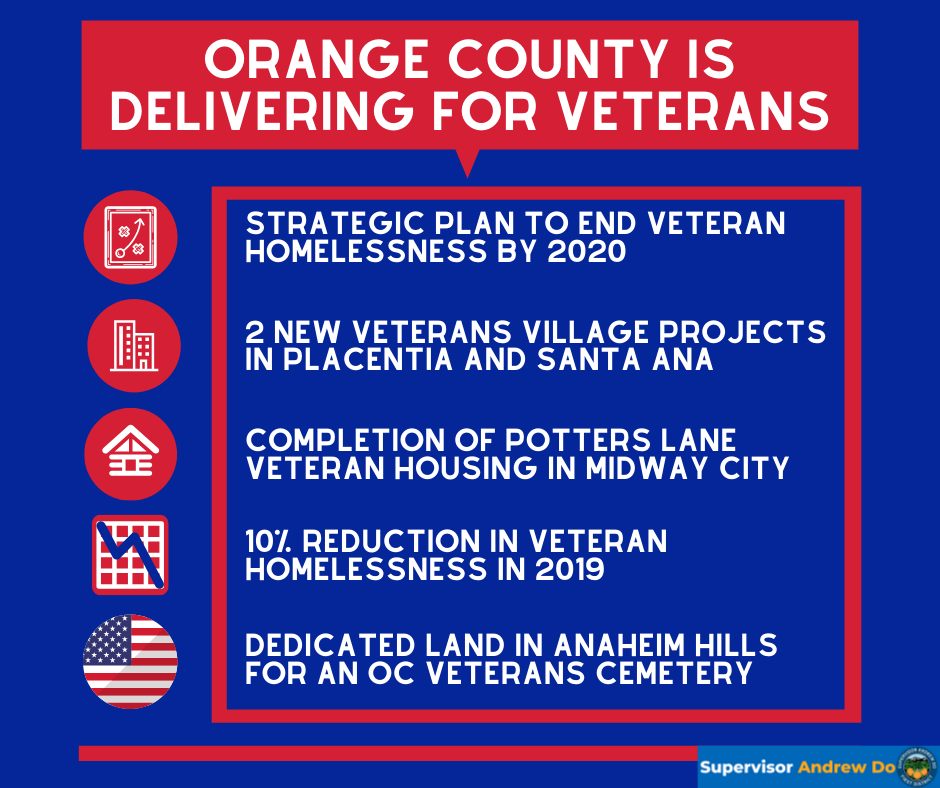 Orange County is stepping up and delivering vital assistance to veterans in need.

“As we approach Veteran’s Day, it’s a time for our community to come together and honor the men and women who have served,” said Orange County Supervisor Andrew Do, who was recently recognized as the 2019 “Elected Official Supporting Veterans” by Support The Enlisted Project.

“Our nation owes so much to every veteran,” said Supervisor Do. “It is our duty to ensure they are properly honored and supported.”

An estimated 130,000 veterans currently reside in the county. Each year approximately 6,500 military veterans will settle in Orange County, according to a veteran study commissioned by the Orange County Community Foundation. From expanded mental health care to housing support, Orange County is delivering meaningful results for its community of veterans.

County Directive: End Veteran Homelessness in 2020
In January, Supervisor Do directed county staff to create a strategic plan to end veteran homelessness by 2020. The plan, which was approved by the Board of Supervisors, builds on the 2019 Point In Time and the County’s efforts to address homelessness through the implementation of regional resources, collaboration, and coordination.

As part of its plan to end veteran homelessness, Orange County awarded $200,000 for housing navigation services for veterans. It has also helped veterans obtain mental health care and employment services as well as broken ground on two Veterans Villages in Placentia and Santa Ana.

In 2017, Orange County saw the grand opening of the Potters Lane Veterans Housing Program in Midway City. The first-of-its-kind veterans housing project was cost-effective, eco-friendly, and comprehensive with its on-site services.

“As a refugee from the Vietnam War, I hold a deep personal debt of gratitude to our brave service members,” said Supervisor Do.