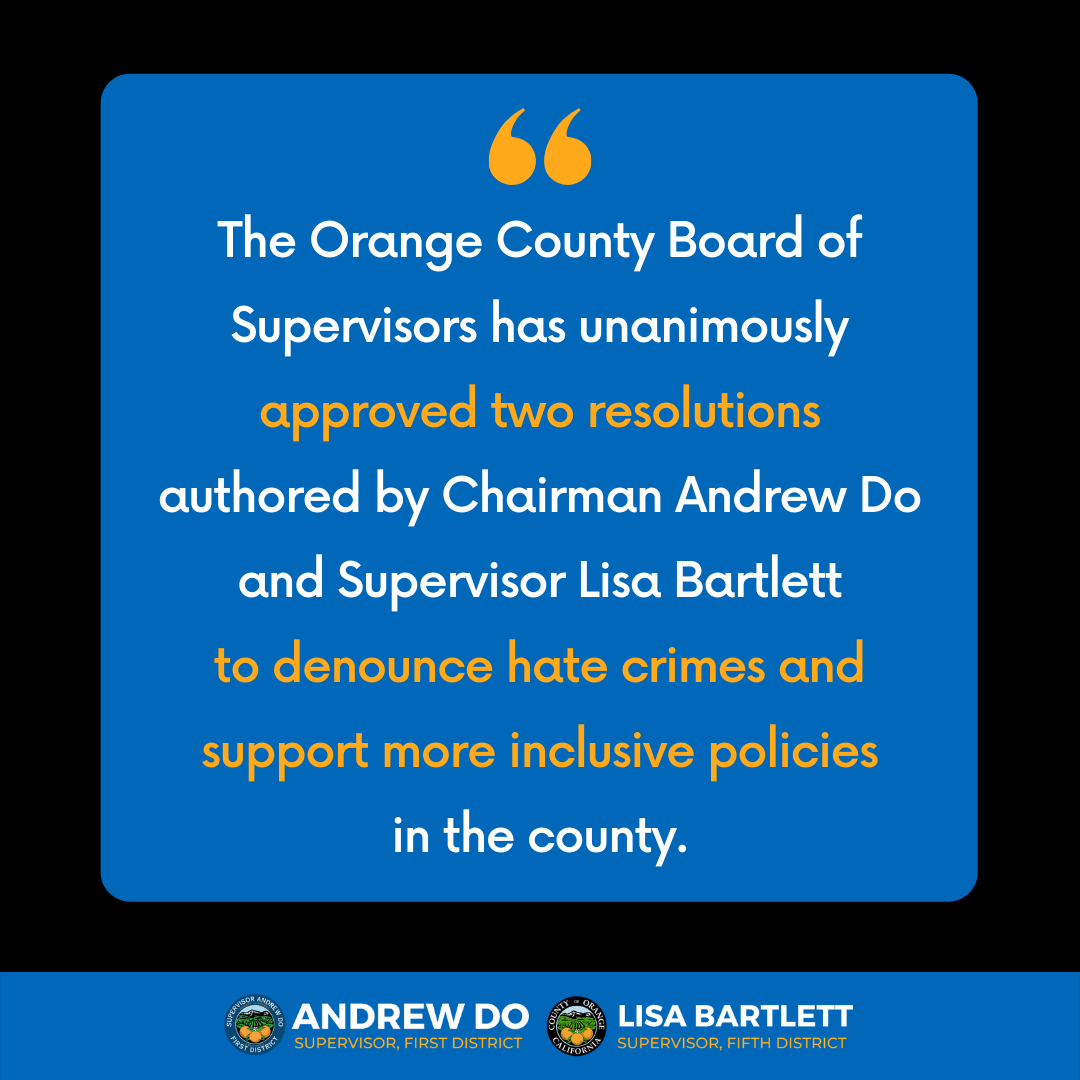 The action was prompted due to the alarming upsurge in COVID-related hate crimes against the Asian American and Pacific Islander (AAPI) community, which has increased 10-fold over the past year according to a report from the OC Human Relations Commission. Both supervisors desired to condemn all hateful acts of racism, repudiate those who perpetrate such acts, and work in our role as a county government to eradicate discrimination.

“Since the start of the pandemic, inflammatory, racist language used by our elected officials and amplified on social media has led to an increase in crimes directed against Asian, Black, Latino, Indigenous, Middle Eastern, and other people,” said Chairman Andrew Do, who represents the First District. “When racists are emboldened to act out their racist thoughts egregiously and blatantly, any soft pedaling will only encourage more victimization.”

“I am pleased to have the support of my colleagues on this tremendously pressing issue,” said Supervisor Lisa Bartlett, who represents the Fifth District. “People of all races and ethnic backgrounds have contributed greatly to the economic vitality and rich history of Orange County and should not be subject to such hateful acts. As such, I am grateful to the AAPI and other community leaders who provided direct input for my resolution, which also includes defined action items for our Board to take to confront all hate crimes in Orange County. We can and must do better,” said Bartlett.

“Discrimination of any kind, against any race, has no place in our community, and we must stand united to denounce such hateful acts,” she said.

“We at the County have a duty to ensure we do not provide disparate benefit or harm related to race, or any other identity,” said Chairman Do. “In the coming months and years, I look forward to working more on this issue with this Board.”

Orange County residents who witness any incident of hate crimes or social discrimination are encouraged to report it to the Orange County Human Relations Commission at 714-480-6580 and local law enforcement so justice can be served.

Both resolutions reaffirm the County’s commitment to promote tolerance and eradicate racism in all its forms.

Orange County Chairman Andrew Do represents the First District communities of Santa Ana, Garden Grove, Westminster, Fountain Valley, and Midway City. One of the first officials in the state to propose a face covering mandate, Chairman Andrew Do is advocating for science-based COVID-19 policies. In addition to health and safety-based COVID-19 response planning, he has reformed Orange County’s mental health services, expanded access to health care, and led efforts to combat homelessness.