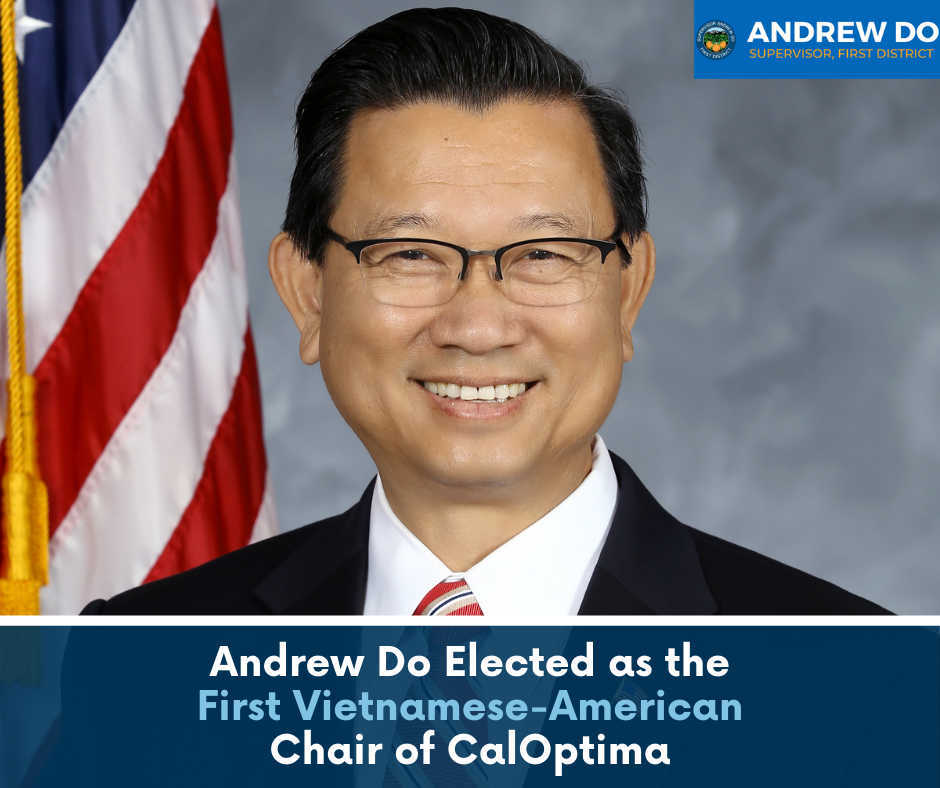 Supervisor Andrew Do has been unanimously selected by his colleagues on the CalOptima Board of Directors, to serve as Chair – making him the first Vietnamese American to take the seat.

Born in Vietnam and raised in Orange County, Supervisor Andrew Do represents the largest Vietnamese community outside of Vietnam as the Vice Chairman of the Orange County Board of Supervisors.

During the Fall of Saigon, Andrew Do and his family fled Vietnam with just the clothes on their back and a suitcase full of dictionaries. Following the American dream, Supervisor Do became a former prosecutor, district attorney, businessman, and judge pro tem, before being elected County Supervisor in 2015.

In 2015, Supervisor Andrew Do was also elected to serve on CalOptima’s Board of Directors.

After over 20 years of witnessing the Santa Ana Civic Center and the Santa Ana Riverbed become the epicenter of the regional homeless crisis in Orange County, in 2015 Supervisor Do championed the first-ever Director of Care Coordination position to oversee the homeless crisis in Orange County. For far too long the county had been slow, reactive and far too restrained in its response to the problem. Now, county departments are working together, and with cities, breaking down bureaucratic silos that inhibit access to service and collaborating with state, federal, and non-profit partners.

During his first Board Meeting as Chair of CalOptima on Thursday, Supervisor Do established a working group – comprised of members from the Finance and Audit Committee, the Quality Assurance Committee, the Member Advisory Committee, and the Provider Advisory Committee – on how CalOptima will partner with providers to deliver healthcare services in community-based and non-traditional services to address the challenges that COVID-19 presents us as a health plan.

“This year has brought many unprecedented changes, and now more than ever we are faced with a tumultuous task on how CalOptima, the largest county-organized health system, can deliver quality health care services to its members,” said Supervisor Do.

“Many of our 767,745 members are fearful of going to a doctor’s office right now,” he added. “We are going to have to think differently about how we communicate with our members; the majority of which English is not their first language.”

As the author of Orange County’s Language Access for All Policy, Supervisor Do continues to advocate for equal access to county services and programs for all its 3.2 million residents.

In 1993, the Orange County Board of Supervisors created CalOptima after witnessing a critical need for primary health providers in their communities.

CalOptima, as the single largest health insurer in Orange County, provides coverage for more than 770,000 low-income children, adults, seniors, and persons with disabilities through four programs funded by the state and federal government: Medi-Cal, OneCare Connect, OneCare, and PACE.

“Serving with my colleagues on the Board of CalOptima as the first Vietnamese CalOptima Chair is truly an honor,” said Supervisor Do. “Congratulations are also in order for the newly elected Vice Chair, Isabel Becerra, CEO of Coalition of Orange County Community Health Centers – who is also the first Latina to be elected to this position.”

Orange County Vice Chairman Andrew Do represents the First District communities of Santa Ana, Garden Grove, Westminster, Fountain Valley, and Midway City. In his second term, Vice Chairman Do has advocated for health and safety-based COVID-19 response planning, reformed Orange County’s mental health services, expanded access to health care, and led efforts to combat homelessness. Supervisor Andrew Do was one of the first officials in the state to propose a face covering mandate.