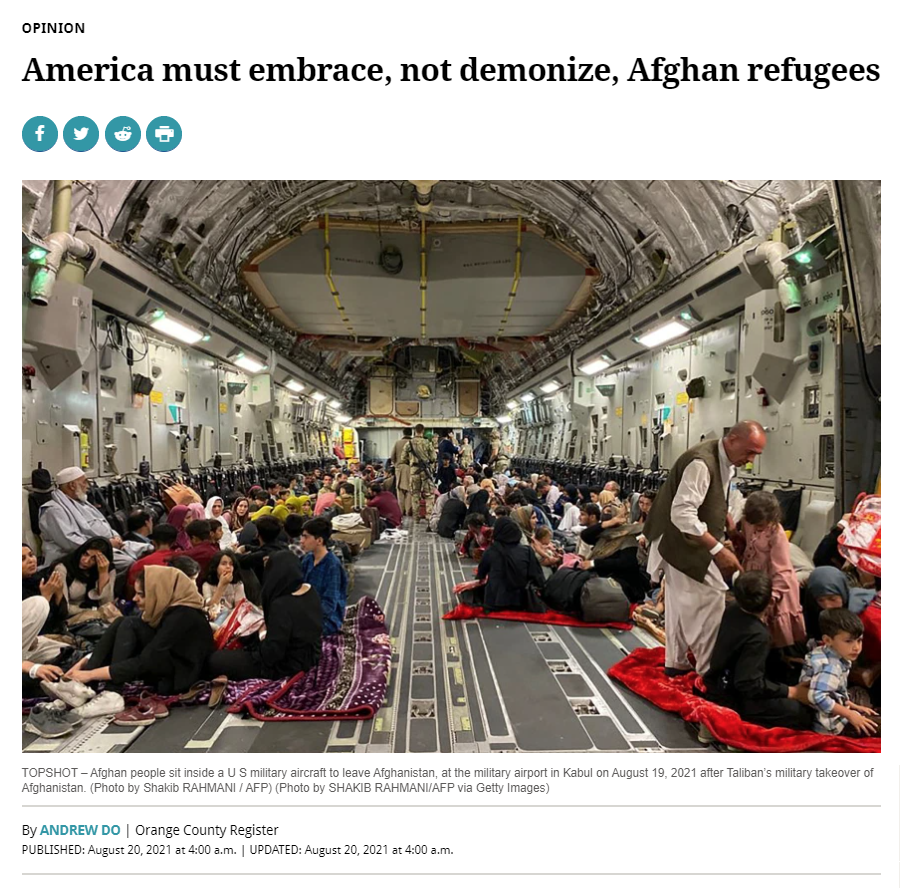 We were one of the thousands of American and South Vietnamese families whose lives were saved by the heroic actions of the U.S. military’s evacuation of Saigon.

As Vietnamese Americans watch the heartbreaking images from Kabul Airport, we are reliving the trauma and deep pain felt during Black April 1975.

We know what it means to flee a violent and oppressive regime.

We understand what it means to live as refugees.

I stand here today, a former refugee, a former asylum seeker, an immigrant, who is currently serving as chairman of the Board of Supervisors for Orange County, California, the 6th largest county in the U.S.

The many opportunities I was presented to build the wonderful life I have is a testament to America’s greatness.

What I have learned over the last 46 years living in the U.S. is America’s opportunity is our greatest weapon against totalitarianism and oppression. We remain the beacon that inspires and motivates people around the world to have hope, aspire and fight for basic human rights.

That’s why I urge the United States Congress and President Biden to act swiftly to create an orderly process to admit Afghan refugees and establish opportunities for resettlement in the United States.

Southeast Asian refugees, like me, waited for several months, sometimes years, in refugee camps in order to be vetted. It was challenging, but it was a small price we were willing to pay, knowing that national security requires prudence.

Once here, it took me another 12 years to complete the process to be naturalized as a U.S. citizen.

The immigration process was thorough, as it should be. I believe the Afghan refugees, especially those who have worked with us over the past 20 years and are now facing persecution and being excluded from school and work, would understand.

We must resist the racist rhetoric from some, who want us to betray our American spirit of generosity and compassion.

The success and assimilation of immigrants throughout our nation’s history continues to serve as a living testament to the awesome power of that generosity and compassion.

Vietnamese refugees were not relocated under any government programs. It was the countless families, church groups and individuals, who took these refugees in and helped them restart their lives solely out of the kindness of their hearts.

The distrust of Afghan refugees that some are sowing among us is not new. All immigrant groups faced this sort of xenophobia at first. Once upon a time, Vietnamese refugees, too, were vilified as Communist infiltrators, a drain on our welfare system, and lawless.

Many Americans in the 1970s opposed the relocation of these refugees in the United States. Even today, I face political opponents that label me a “Vietnamese parasite” and tell me “to go back to Vietnam.” Think of how many resources, in economic and human capital terms, we would have lost as a nation if we didn’t follow our American spirit then. We need to face xenophobia, fight it, and overcome it together.

Together, all Americans must fight back and speak out against those who spread any anti-refugee bigotry and hatred.